Anyone who knows me (Elaine), owner of Baa Baa Brighouse, will know two things about me: 1). I am politically unafraid 2). I have loved Pearl Jam from the first and always will.

It would appear that my favourite Seattle based band has been causing somewhat of a stir with their latest concert poster depicting a burning White House and the skeleton of President Donald Trump being pecked by an eagle. 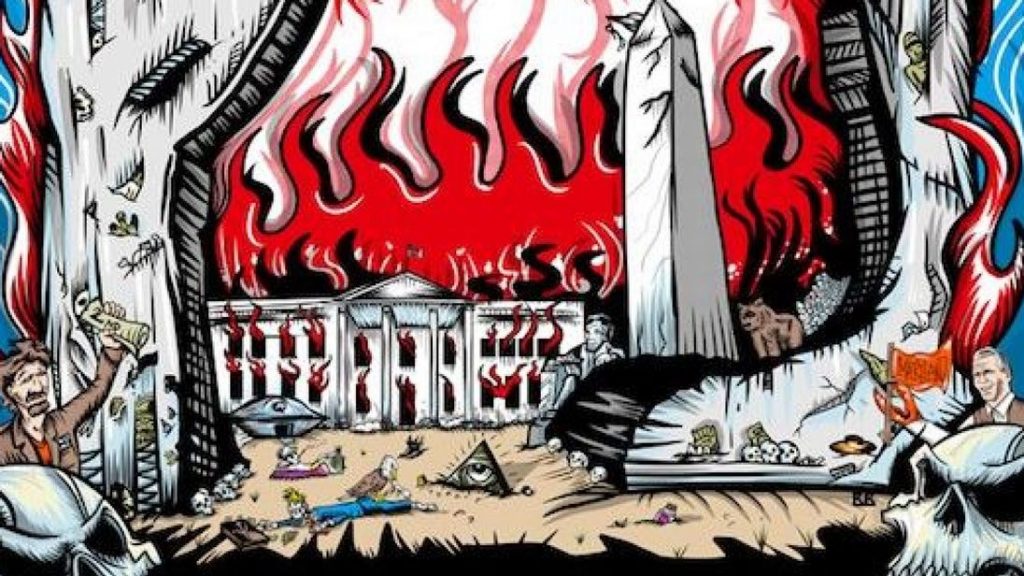 Love it or loathe it, the collaboration between bassist Jeff Ament and Bobby Brown is art.  It is often said that art mirrors life, if that is true then perhaps people shouldn’t be offended by a picture but should be offended by reality. I know I am.

I’ve spent a good few hours trawling the very bottom of the internet (and by that I mean the comments section on any news story mentioning the band’s artwork).  Mostly I found outraged Republicans who said they were currently dancing round a bonfire of Pearl Jam discs and I quote “[would] never allow another of the band’s songs to be played in [their] presence”.

Forgive me for stating the obvious, but you have to have been living under a rock for the past 28 years to not be aware of Pearl Jam’s politics. Similarly, Baa Baa Brighouse nailed their colours to the mast some time ago. See our ‘Carnival of Resistance‘ yarn as an example.

It seems to me that whenever fascists raise their ugly heads, one of the first things they attack is art – whether that is paintings, music, books or sculptures. Just look at the recent attack on Bookmarks, the socialist bookshop in London. Or, look at how an art installation depicting the names of dead refugees has been repeatedly vandalised in Liverpool.

I do wonder what next? Will the fascists turn up at Knit and Natter armed with scissors and proceed to cut up my wool? I’d like to see them try. Have you ever seen an angry woman with knitting needles – she can really do some damage.

So, Baa Baa Brighouse is showing solidarity with Pearl Jam – quite frankly the best band in the world – and artists everywhere who find their work threatened by the narrow minded.

On Saturday August 18th, we will be releasing an exclusive limited edition hand dyed yarn inspired by Pearl Jam – their music, their artwork, their activism and we will be donating £3 of every skein sold to The Vitalogy Foundation set up by the band in 2006.

The Foundation supports the efforts of non-profit organisations doing commendable work in the fields of community health, the environment, arts and education and social change.

One thought on “We Show Solidarity With Pearl Jam”